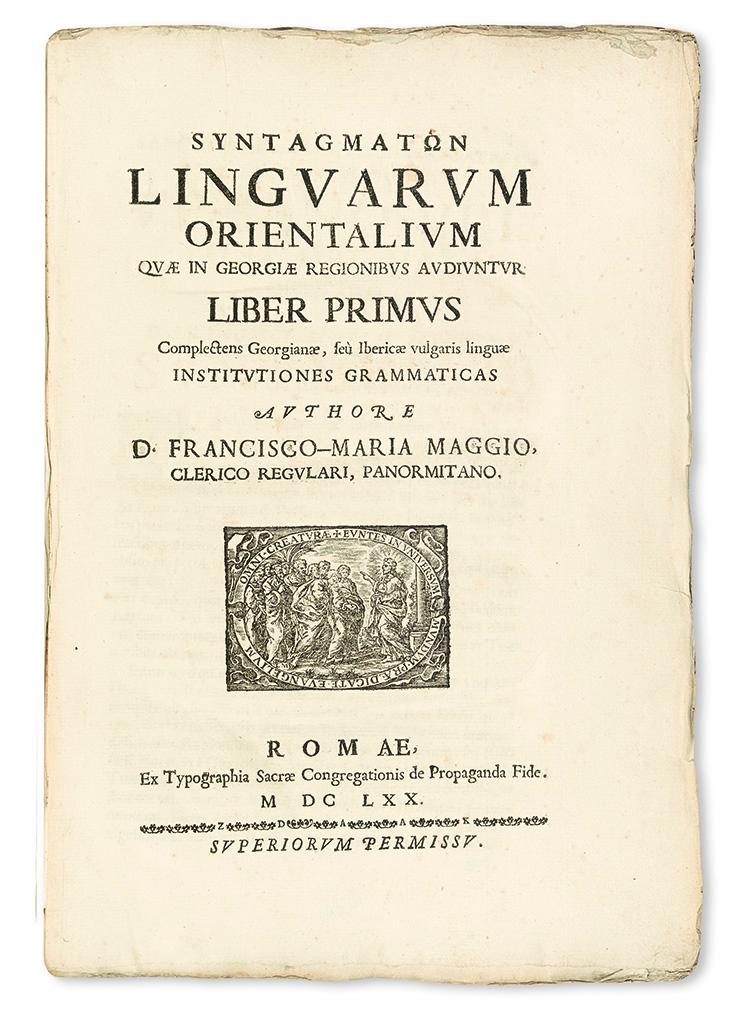 The first part of the book is called "Grammar rules of Georgian language", which is divided into for parts: orthography, etymology, syntax, and prosody.
According to Maggio orthography is nothing but a set of rules of right writing and reading. In this part of the book, he explains all three Georgian Writing systems: Mkhedruli, Asomtavruli, and Nuskhuri. The author tries to find an Italian equivalent for each Georgian letter with an Italian transcription and writes down some Georgian words. In the same part, a reader will find a poem written by Maggio himself. The poem is meant as a tool to make it easier to memorize the Georgian alphabet. He also explains hand moves needed to write each letter of a Georgian alphabet.
The second part of the book is about etymology. According to Maggio etymology is a set of rules about producing parts of speech. He enumerates nine parts of speech of Georgian language: noun, pronoun, verb, participle, preverb, preposition, postposition, interjection, and conjunction.
The author of the book recapitulates five categories of a noun: gender, number, declination, face, and comparison.
1. In Georgian, there's a single grammatical gender.
2. There are two grammatical numbers in Georgian: Plural and Singular.
3. According to Maggio, just like in Latin, there are six declinations in Georgian, instead of actual seven. The reason for this mistake is the wrong method of approach which was quite widespread during Maggio's times: Linguists of that period used to compare every single language to Latin.
Puzzled by a complex nature of a Georgian verb, Maggio denotes that he will try to overview those aspects of a Georgian verb that are more or less understandable for foreigners. For him, such an aspect is Grammatical mood. He adds that the absence of conjunctive in Georgian is compensated by the use of irrealis mood. Under the influence of Latin language, he writes down some irregular Georgian verbs but makes some mistakes describing their infinitive forms.
Considering a shortage of knowledge of a language, some of Maggio's observations about Georgian verb are really surprising.
The most interesting part of Maggio's book is about syntax - For him syntax is "proper combination of parts of speech".
He reviews only two kinds of syntactic relations. At the end of the topic, he raises quite unusual theory: "The question and the answer appoint each other in declination".
Maggio tried to explain the Georgian grammar by comparing it to the Latin one: "Georgians have many grammatical rules, that are different from rules we have in Latin". That phrase explains why he considered an object in the Georgian sentence as an accusative.
Maggio admitted that in the Georgian language the declination of the noun is dictated by the semantics of the verb:
"If a verb expresses a shortage of something it requires genitive or dative declination of the noun".
The last part of Maggio's grammar is about prosody. As the author denotes "It's very important for proper speaking to know the rules of the prosody".
He declares "au" complex as a diphthong, on which must always come an accent. According to him in Georgian, an accent comes on the last syllable of the word, which in fact is not the case. The accent on the last syllable is typical for the Gurian dialect. We can suppose that this part of a book is written during his stay in Guria.
Above we reviewed some parts of Francesco Maria Maggio's grammar of Georgian language as shortly as possible. As expected from the man of limited knowledge of the language there are a lot of mistakes in Maggio's book but as the first-ever attempt to compile Georgian grammar it bears the great significance. Maggio's book has been only vade-mecum in Georgian grammar for the next two hundred years.